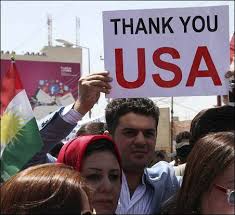 Every country that ever aligns with the west, such as the Philippines, Japan, South Korea, West Germany, Poland, Israel and many others, have become much better places to live than countries that chose not to align with the west.

So, after these very clear results, why don’t countries all want to align with the west, particularly the United States? The US can defeat any army on earth, so why don’t the citizens under oppressive regimes call for the US and other western nations to come and save them? Why is it that even after an actual invasion of countries, such as Iraq, are the people still hesitant to help US soldiers defeat the bad guys that are terrorizing them and their families?

The reason is because since the 1960’s the left uses war as a political tool to gain back power by criticizing the United States and point out its flaws. This, in turn, leaves the US supporters that live in the embattled countries to be murdered.

To elaborate, I’ll start with the first country that fell victim to this destructive leftist strategy, which was Vietnam. After the Korean war, the US and their allies were riding high. The United States had rebuilt Japan and had rescued South Korea from the socialist North Korea. Vietnam was undergoing the same circumstances that Korea had gone through, which was the oppressive north was trying to rule the country like Russia and China. While the South wanted to be like the United States and the west. When the United States entered the war to help the South Vietnam become a second South Korea, most of the US appeared to be on the same page.

However, after 10 years, the left had managed to exploit some mistakes the US had made to make the US appear to be the bad guys. This is so they can bring down US morale and allow them to gain power, with the promise to change things. Despite the fact that the Vietcong had essentially lost the war, the only politically safe option was to withdraw US troops the troops from Vietnam, which they did between 1973 to 1975. They did this because it was politically unviable to still be for the war in Vietnam.

For the South Vietnamese, the consequences were catastrophic. The South Koreans that had sided with the US, were abandoned to fend for themselves against the now more powerful Vietcong. The slaughter of hundreds of thousands of people ensued and the rest of the world realized that US politics made the US an unreliable ally against tyranny.

Iraq is another perfect example of what happens when politics gets in the way of fighting for freedom. For instance, in Ramadi between June-November 2006 the United States had taken the city back from the Taliban. Numerous Ramadi citizens had helped the US and were very grateful for our soldiers’ efforts and sacrifice. However, when the United States pulled all their troops out of Iraq in 2013, on Barrack Obama’s insistence, the vacuum was left open for ISIS to move right in. When Ramadi was taken over by ISIS, they had a list of names of people that had aided the US in 2006. ISIS then proceeded to slaughter every one of them along with their entire families.

What happened in Ramadi is what happened all across Iraq and proved again that taking the side of the US is a major risk. The left criticized the Iraq war to gain political power and pulled all US troops from Iraq, despite the many warnings, which now has led to 100,000’s of people murdered at the hands of ISIS.

The truth is that we have no idea of how many people in the middle east support the US and want our values because they can never speak about it, nor ask the US for help. Regardless if you agree with a war or not, it is inhumane to leave the people you promised to protect, completely defenseless to truly evil people.

Even with Muslims that live in the west, there is a major risk to stand up and say, “I love the west and American values, and think that Muslims should adhere to them.” This is because the progressives will side with the Muslims and leave you to fend for yourself instead of propping up the true reformers of the religion.

The US will never be able to free these people from murderous regimes like they had in the the past for South Korea, because the citizens are too afraid to fight with us. Think about it, if you were living in Syria right now and the US came would you support them? Even if you loved the west and wanted your country to be like it, it would be such a risk to help our soldiers defeat your enemies. The reason being, if the US invades Syria with a republican President, the left will use that opportunity to deem the right warmongers, just to gain power back. Once the left secures power, they will have to pull the troops out as promised, and now any supporter of the US within Syria will be immediately executed.

The world is falling further and further into dictatorial darkness because the greatest defender of freedom (US and the west) is no longer an option to help you fight against it.

So how do we solve this? How can the US and the west save the world from these dictators despite these politically polarizing democracies?

First, we have to assure our allies that we will stay with them until the very end. The US has to design war time guarantees that once a war is started, no future US President can withdrawal from it, until the objectives are completed. We also need to have a firm stance that anyone who wants freedom and liberty from tyranny, will have our support. If we don’t, then people will be too afraid to speak out in opposition to these murderous thugs, because the US may or may not come to help.

If we don’t support the people that want freedom in the middle east and all over the world, then big government dictatorships will continue to grow. They’ll continue to grow to a point that tyranny will eventually come knocking on the United States door. And by then, it may be too late to stop it.