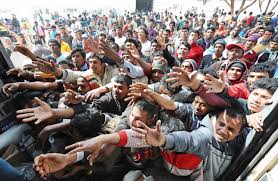 In the past, American citizens used to vote for other American citizens to represent them in the form of government officials. These representatives would then be tasked with the job of providing policies and laws that would benefit the American people. Basically, do what they can to help the people that they represent. Somethings changed however, particularly with Democrats. Politicians no longer talk of what they’re trying to do for the American people, but lecturing Americans on what we need to do for the world.

Barrack Obama constantly lectures Americans on how we need to be compassionate to Mexicans south of the border, and the Syrian refugees. He touts that he is the moral compass of our nation and he will do anything in his power to take away American citizens tax dollars to give to these people. He wants to allow them to come live among us in subsidized homes because that’s what he feels is right.

This isn’t the job of our President, nor should it ever be. President’s should not push their own morals on others and force the people, whom they represent, to subsidize and adhere to their philosophy. The President or any elected official is supposed to do whatever is best for the American people and the American people only. They are supposed to use our money and resources only for the benefit of Americans.

With that in mind, is there any benefit for Americans to having massive Islamic immigration from Syria? Besides the obvious reason of making some people feel good and morally superior for accepting them, of course. There are numerous downsides which I’ll get to, but what are the upsides? Tucker Carlson recently had democratic strategist Nomiki Konst to discuss just that.

Basically, the only response Ms. Konst had for upsides were that there would be minimal downsides or a net 0 for accepting these people. But if there is no upside for Americans and potential huge downsides than why are we considering it? Why is it that if Democrats feel bad they want to burden Americans with a potential huge crisis? Democrats can easily set up a camp over in Syria where these refugees are protected, but they want to bring them here because they feel bad.

I can’t figure out any upsides to this proposal, so let’s look at the downsides:

The United States has plenty of people here in the United States, that need help. So why do we have to import more problems if we can use those resources to help the people in need here.

Politicians have no right to give our money and resources away to people that aren’t Americans. We have millions of Americans who need help and politicians should only be focused on them. If there’s no benefit for us, then there shouldn’t be tax dollars going that way. If someone feels bad for these refugees, then they can send their money over to the Syrians but they shouldn’t force their morality on others! Especially when they will be allowed to sit in their ivory towers and not have to suffer the repercussions of their actions.