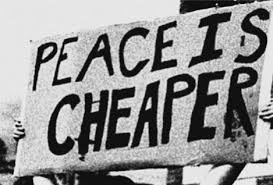 The progressive movement has always made the claim that they are the movement of peace. Despite the American democratic party’s violent political history, ranging from the destructive “weather underground”, the “symbionese liberation army,” to today’s (ironically named) “Antifa” movement, the left has still somehow managed to convince large amounts of people that they are on the party of peace. They’ve managed to persuade people that they are more peaceful than conservatives because they take one stance that the right does not, which is choose peace at all costs.

The left has demonstrated that they value peace above all else, when it comes to foreign policy. They believe that there is never a reason for war and that you should sacrifice all else before peace. Conservatives, on the other hand, believe that there are certain values that rank much higher than peace, the first and foremost is freedom. They believe that if given the choice between freedom or peace, then peace should go onto the chopping block. Another value that conservatives are willing to go to war for is to fight evil. The left believes that we should never interfere in other parts of the world, while most conservatives believe that there are certain evil people and acts that need to be confronted.

In this article, I would like to explore two questions that I have about these so called “peace” stances. First, does the anti-war, anti-intervention, peace at all costs stance, actually lead to lead to peace? Secondly, is peace the most important value that anyone should hold?

To tackle the first question, which is discusses if the left’s stances lead to more peace, I will break down my argument into two sections. The first item is anti-intervention, the second is anti-war and peace at all costs.

When arguing their stance of anti-intervention, the first argument from democrats that you’ll hear is the Vietnam and the Iraq war. However, the argument is not about when and how we should intervene, which is article all on its own. I simply want to make the argument that there are times that the United States should intervene and that American intervention in the past, has actually led to more peace not less.

Let’s start with WWII. If the United States had not intervened, the world obviously would be a much more violent and terrible place, under Nazi rule. If we had intervened earlier, it would have actually lead to more peace and less violence. Next let’s look at the Korean War, which were the exact same circumstances as the Vietnam war. If the US had not intervened, then South Korea would have suffered the same fate as North Korea and millions more would have starved and lived under a socialist dictator. Finally, a time that the US should have taken action but didn’t is the Rwandan genocide. Bill Clinton knew early on what was happening in Rwanda and had decided not to intervene. If he had chosen to send American troops, hundreds of thousands of Tutsis would not have been murdered.

The point is, that there are times where violence and interventions are absolutely the answer, and where the pacifist approach actually leads to more violence.

Next, I would like to address the peace at all costs stance that is taken by the left. A current, modern day example of this would be the left’s refusal to confront Islam. Progressives hold the belief that if we keep appeasing Islam then it will go away. They believe that if they don’t confront their backward ideology, then the attacks will stop. They are so non-confrontational that they tell victims of rape and violence to not confront the ideology that allows this. They are willing to give up their culture and allow a tyrannical, anti-freedom, backwards barbaric culture to take to its place. All so they don’t have to confront their opponents.

Obviously, this pacifist, anti-confrontation position taken by the left isn’t working, as terror, rape and violence has only increased. Sadly, this idea has never worked, nor prevented violence. European countries, for example, signed many treaties with Hitler in order to prevent war, and that didn’t stop him from starting WWII. As a matter of fact, not once in history has the appeasement to an aggressor ever turned out well for the appeaser. I challenge anyone to show me anything to the contrary.

Even though I just argued that the anti-confrontation movement doesn’t work, it is beside the point. What I want to know from leftist is, “why is peace the number one priority?”

If these pacifist movements actually worked and lead to more peace, but you had to sacrifice your freedom and values, should you take it?

Let’s say that we decided not to confront Adolph Hitler and he took over the world. If he promised us peace in exchange for us living under his rules, is it worth it? Or if Iran, who will soon have a nuclear bomb, promises us peace, if we live under Shariah law, should we not confront them? Because that’s exactly what the left says when they utter the moronic phrase of, “war is never the answer.”

Security, safety and peace are wonderful things to have, but not at the expense of freedom. If leftist disagree, please explain why jail isn’t the best place to live? In jail, you can stay in a cell and be provided food, water, and safety. However, there’s a reason that democrats aren’t lining up to go to prison. It’s because you aren’t free!

Millions of American men and women chose or choose to fight for this freedom because they know that life isn’t worth living without it. Because of their sacrifices, man been freer or more prosperous, than here in the United States. Yet, the left is willing to give that all up so they don’t’ have to fight.

Benjamin Franklin once said, “those who would give up essential Liberty, to purchase a little temporary safety, deserve neither liberty nor safety.” I’ll go even further and ask, “if you actually achieved safety at the expense of liberty, was it really worth it?”