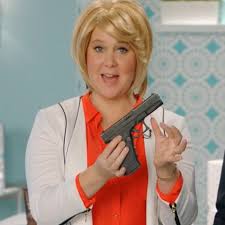 19-year old up and coming feminist, Cassandra Abortus, faced the progressive court today for making the vile suggestion that guns could actually help the feminist movement.

“I just thought that with the current rape epidemic, especially on college campuses, that a strong independent woman. who doesn’t need a man, might find a gun helpful for protection,” Cassandra said to the panel of judges.

“It was an honest mistake,” she pleaded. “I still believe that partial-birth abortions are wonderful and that the women’s pay gap exist. Please I’m just as much of a leftist as you guys!”

The panel of feminist judges were made up of three women: Amy Schumer, Meryl Streep, and Latin feminist dance theory professor Iggy Norant, filling in for Lenah Dunham.

Amy Schumer was first to respond. “Ms. Abortus, me and my uncle believe guns are bad because they kill people.” After a brief pause for poignant effect, Ms. Schumer continued her lecture by saying, “There’s so many things wrong with your line of thinking. First off, it’s a biological scientific fact that women are physically stronger than men, just as it is a fact that women can become men and vice versa. With this fact, in most cases, women should be able to overpower their rapist. Secondly, we shouldn’t be focusing on protecting ourselves, we should be focusing on telling US society, to stop making their boys rapist!”

After the claim, Ms. Schumer seemed quite winded and began gasping for air. Cassandra decided to take this opportunity to ask the question, “But what should women do in the meantime, before we have society eliminate all rapist? Also, what should we do if, in the rare occurrence, our attacker is physically stronger than us?”

The panel was taken aback by these ignorant questions. This time, Ms. Norant decided to respond. “To answer your first question, we should never focus on protecting ourselves because in a perfect world there would be no rapist. We should be able to walk in any neighborhood at any time wearing anything and shouldn’t be worried. And for your second question if the rapist is stronger than you, you should call a police officer, even though all cops are evil.”

Ms. Abortus seemed quite confused and started to say, “that doesn’t really answer my,” but was cut off by Meryl Streep who said, “Hollywood is made up of the finest and most brilliant people! Actors and Actresses are the most important people in a society and you people should consider yourselves lucky that we decided to use our extreme intellect for the entertainment arts, instead of something wasteful like medicine or engineering. No more questions!”

Even though Ms. Streep’s statement didn’t apply to the situation, the entire courtroom erupted in applause. At this point the three judges stood up and left for deliberation. After 22 seconds of discussion, most of it spent on Amy trying to catcher her breath, the three returned with their verdict.

“Cassandra Abortus, please rise,” Amy said. “We really do like some of your stances like abortion, your BLM support, and your irrationality when talking about transgenderism and the women’s pay gap. However, you have broke one of the 35,000 contradictory progressive commandments by believing that guns could be beneficial in some circumstances. This is completely unacceptable and we have decided to punish you by giving you the progressive death penalty. Which of course is deeming you a racist, bigot, sexist, homophobe like your NRA brethren.”

Ms. Abortus fell to her knees broke down into tears and while the courtroom was silent in shock at such a harsh ruling. The three judges rose and headed for their 2nd lunch at the Chipotle across the street.

After the decision, Ms. Abortus was never heard from again.