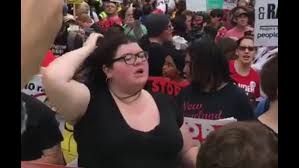 After the new year, we decided to travel to the University of Southern California to see what students thought the United States future would be like under a Trump administration. We then wanted to ask them how America would have differed if Bernie or Hillary were elected into office.

We met a young student, Libby Z. Ombie, who refused to identify her gender, even though we never asked because it was very clear that she was just an overweight woman. We asked Ms. Ombie what she thought the future of the United States entailed.

“World War III is going to start pretty quickly,” Libby retorted. “That is after all the gays, transgenders, minorities and Muslims are executed.”

Libby’s face was red as it was clear she was winded. After a moment of gasping for air, Libby finally continued, “All the corporations will turn everyone else into peasants, most likely. And all the women will be raped before being forced into sexual slavery.”

With such a grim outlook on America’s future, we asked the young student what she thought might have happened here in the United States, had Bernie or Hillary been elected instead of Trump.

Ms. Ombie became very enthusiastic to answer the question, as her breathing rate increased to alarming levels. She responded, “Well the government would provide free healthcare, free food, and free education. Also, the government will make sure that no hate speech can exist. If anyone calls me fat or assumes my gender they will be punished. Women and men will be separated, to prove women’s superiority and everyone will work and will receive equal pay for whatever work they do. Finally, the government will control who gets what and what social rules exist, because it shouldn’t be decided by society. Society right now has done a terrible job when deciding who is pretty and what corporations should provide for us etc. Under democrats, they would have taken that pressure off,for people like me, to conform to the unrealistic standards of society , as it would be outlawed to think outside our universal rules.”

After Libby’s rant, she needed to sit on a park bench and catch her breath. We than pointed out to her that the world she described seemed to be more like what life is like in prison, or under a tyrannical dictator, like North Korea’s Kim Jung Un.

Libby looked up and appeared quite shocked. “Oh yah!” she said. “I wonder why those people constantly try to escape such wonderful places. I’ll do some research and get back to you.” Libby then departed as she was late for her class.

We tried to follow up with Libby, but it was soon discovered that she had passed away, shortly after our interview, from a heart attack. Her mother left us a statement, “Libby was a wonderfully healthy woman and she unfortunately passed because of the terrible healthcare in this country, not because she didn’t fit society standards of being thin!”