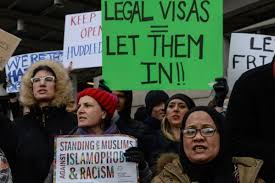 You’ll hear people on the left, particularly celebrities, say things like, “I don’t want to live in a country that won’t accept refugees” or “a good country doesn’t use borders, and we should let anyone in that wants to come here.”

However, anyone with a brain can see the devastating effects that those open-door policies have had on Europe. Rape, murder, violent crime, and terrorism has sky rocketed because of the open-door policies that Angela Merkel and the European union have burdened the European population with. These incidents were obviously foreseen by many because it’s easy to assume that this would happen. It doesn’t take much foresight to see the major conflict that would ensue when you allow mass immigration of a culture that has backward views when it comes to freedom of speech, homosexuality, women, and other freedoms that the west holds dear to them.

So, knowing full well that the outcome will most likely be negative if we have open borders and let in millions of refugees, why do leftist demand it? Why do they think it is a good idea? Because leftist don’t usually have the suffer the consequences of their demands.

Five years ago, most leftist in the European population called for letting in more refugees. However, among even the staunches leftist in Europe, only a small number of leftists still believe that letting in millions of un-vetted people from Islamic countries was a good idea. It’s only the likes of the richest and most elite Europeans, like J.K. Rowling, that call for more refugees. The reason that the number has dwindled to only a handful of rich celebrities in Europe is because only a handful of people haven’t suffered the consequences of these policies. It’s hard to call for more refugees when your see family members or people in your community being raped, murdered, and victimized by a hostile Muslim population. It’s hard to see your culture being picked apart by a community that provides nothing and takes everything from you and your culture and don’t even say thank you.

Here, in the United States, there is a much higher percentage of liberals calling for more refugees and for open borders with our southern neighbors, Mexico. The reason that the leftist in the USA are still adamant about bringing more refugees, is because they haven’t experienced the consequences and devastation that it will bring. The only people, in the US, that have felt the pain of more refugees are our small communities that don’t have the power and resources to send these Muslim populations away.

I guarantee that Merly Streep and Jimmy Kimmel would be singing completely different tunes if they had to live in one of these heavy refugee areas. You’ll notice that all these celebrities that call for more illegal immigration and Islamic refugees don’t offer up their vast money or resources, such as housing, to these people. They never have to feel the effects of their demands that make them feel morally superior.

Immigration isn’t the only leftist demand that have negative effects that the left won’t feel. Leftist call for higher regulation on fossil fuels, which will raise prices on energy that will hurt poor families that struggle to get by. Progressives also call for police reform, but don’t have to live in the high crime areas where police can’t do as much to stop the bad guys from committing crimes. The list goes on and on, ranging from demanding higher minimum wage to making sure that we can’t torture proven terrorist and save the lives of thousands of fellow Americans.

Most conservatives know that democrats dare guilty of this and attribute their lunacy to ignorance. I would also agree that the vast majority of liberals are good people who just can’t foresee the devastation of their policies, and truly believe they are doing a good thing.

It’s one thing to truly not foresee bad things happening, but it’s another to deny clear evidence of what can happen. Liberals can clearly see what happened in Europe and still chose to deny the truth because it hurts their world view. Denying the truth to keep your opinions in line is just as evil as the terrorist acts that will be committed when you let the refugees in.

Conservatives must force liberals to see the ramifications of their actions and confront them at every turn. Even if they are truly nice people that are your family or friend, their denial of the truth is just as grave as a sin as someone who knowingly commits bad acts.

If confrontation doesn’t work, we must try and demand that the government send these illegals and refugees, in heavily liberal areas. We should demand that the Islamic refugees reside in Hollywood, Washington and Manhattan. We must demand that the left live up to their demanded policies and force them to take in refugees themselves or shut up. Hopefully, these ignorant narcissists will see the terrible outcome before it’s too late. So far, however, leftist have never ever had to truly see the havoc that they have wreaked on their fellow citizens.