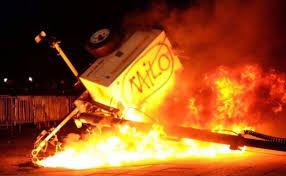 As stated in last week’s piece “Who is the Perfect Progressive?”, the irony of someone advocating to commit violent acts against people who they deem, “Nazi’s,” seems to escape the left. I chuckled for a moment, when thinking about it. After the moment of reprieve passed, I began to wonder, “what mental gymnastics did the Nazis and, on a smaller scale, today’s political left have to perform to be able to justify violence and hatred against people who they didn’t agree with? The Jewish population in the 1930’s was not calling for violence against the Nazi’s or seeking control over Germany. Yet, the Nazi’s still believed that it was necessary to genocidally murder them. Republicans today are not calling for violence against the left or seeking control over people’s lives, yet the left believe that it is perfectly justified to silence them through any means necessary, even violence.

Ayn Rand once said, “If any civilization is to survive, it is the morality of altruism that men have to reject.” I believe that members of the today’s democratic party and the murderous socialist dictators of the past did not practice Ms. Rand’s concept. I believe that liberals today and the Nazi’s of the past thought that they were doing the right thing for mankind and therefore, any action to achieve their goal is justified and good and moral.

Often, you’ll find that your average college women’s study major leftist has such a grandiose view of themselves, that they’ll have no problem lecturing anyone on how heavy taxes and regulations (government control) is good for the world. They’ll tell you that their hero Bernie Sanders will save us all if you give him a chance. When you ask this person, “Why is it alright for the government to take people’s hard earned money and re-distribute it to others?” Their response will usually be, “they can afford to give more and the poor need it.”

That preceding progressive response is truly horrifying if you think about it. They are basically saying that, “I have decided that if someone has too much, it is alright to forcibly take from them and give to someone else.”

It’s that type of logic that allows the left to believe they are moral for silencing and attacking people that don’t agree with them because they believe that they are helping humanity. They believe that even though their actions are bad, that it’s fine because these people are evil.

In fact, most of the left’s heinous actions fall under this line of thinking. They believe it’s alright to take away a Christian baker’s rights and force them to serve those who they disagree with because they deem homosexuality good. They think that it’s alright to lie and slander someone or make up a false narrative as long as it brings attention to something that they want attention brought to. (the Michael Brown-Hands up don’t shoot.) To liberals it’s fine to take away someone’s fundamental right to own a firearm because they believe it will be a better world.

Those who call for socialism have to have egos of biblical proportion because socialism is the belief that an individual or group of people should decide what’s best for everyone. It takes an epic level of narcissism to stand up in front of a group of people and say, “If you give me power to run your lives, I will make sure everything is great for everyone!” It’s only that monolithic arrogance that will lead someone to believe that it’s justified to do bad and violent acts to you because it will help you. It’s very easy to see why these socialists’ leaders turn into homicidal dictators, once they achieve power. They become God’s to themselves and their leftist following because they are believed to be the savior humanity if given enough time and power.

The truth is, no matter how good the intention, committing evil acts to achieve to your means will never get you to a better world. To leftist across the world, know this: No one is God and no one is always right. The belief that some person or party can run everyone else’s lives and that they should do whatever it takes to make sure they get power is evil. If you give someone enough power to take away the rights of others, you will inevitably get tyranny.

I know most of you would answer no. I know this because I could see the horror on your progressive faces when you realized that Donald Trump was in a position that liberals gave too much power to because they wanted Barrack Obama to have it.