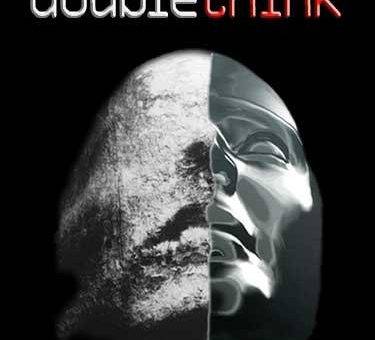 Does anyone else find it confusing when you hear the same people who claim that Christianity is a patriarchal system, simultaneously make the assertion that Islam is peaceful and not patriarchal? Does anyone scratch their heads in bewilderment when the very people who claim that the United States is racist and oppressive towards minorities also say that it’s inhumane to not let all the minorities who want to come into our country in? Why would minorities want to come to such a place that would treat them so poorly?

These people aren’t just hypocrites who can’t live up to their own standards, because it’s the very standards they hold that are contradictory. These people are actually suffering from the term, coined in George Orwell’s novel “Nineteen Eighty-Four”, Doublethink. 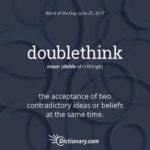 Doublethink is the act of simultaneously accepting two mutually contradicting beliefs as correct, often in distinct social concepts. The very definition itself doesn’t make sense because how could someone believe two beliefs that completely negate each other.

Despite the non-sensical definition, it seems that there are always situations where progressives hold opposite beliefs from nearly every standard that they claim to live by. For example, sexual orientation and race are determined at birth but actual sex is a choice. Continuing down the transgender rabbit hole, sex is a social construct but men can have female brains and vice versa. They believe in free speech, but want to stifle any speech that they disagree with. They constantly shriek that only the police should have guns but also that the police are fascistic pigs. They rail on America and all how the capitalist system is wrong, yet they never mention the hundreds of millions of lives that big government has killed. To them, America is evil and racist, but China, Russia, Cuba, Venezuelan countries are just misunderstood. Antifa’s name is literally double speak. They literally call themselves antifascist yet use fascistic means to stifle achieve the very same goals that the fascist wanted for themselves. Don’t even get me started on topics such as cultural appropriation or affirmative action. 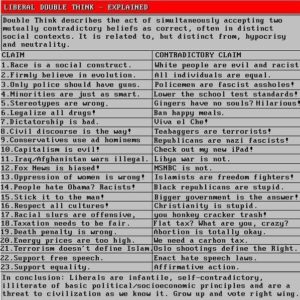 I could go on for days, but the truth is that nearly all the left’s principles are contradictory. This does not absolve the right as they are also guilty of hypocrisy and doublethink, but there’s a reason that it seems that every leftist principle that progressives uphold, contains a mirror image of a principle that they also uphold. It’s because they left only has one true standard and principle that they live by and anything that helps them maintain their façade, they will hold up as a principle, even if that very principle is a direct opponent of another principle they believe. The only principle and standard that the left, socialist, and communist hold is that everyone is equal, and any inequality that exist can only be explained by saying that the entity who has more, oppressed and stole from the entity who has less.

Using the aforementioned underlying principle, doublethink makes perfect sense. Western Christian culture is rich, while Islamic culture is poor. Therefore, it’s easy to criticize Western Christian culture but you can’t criticize the oppressed Islam. It’s the same reason that they can call America an oppressive system at every turn, but can defend Venezuela and Cuba whose socialist dictators have oppressed their people for decades. It’s why they say that Mexican culture is great and America’s is bad, while saying that America should let all the Mexicans in because Mexico is such a bad place.

Truthfully, I believe that most of the people who hold these contradictory beliefs know, in their heart of hearts, that they are constantly contradicting themselves. The tactic they use to try to maintain the illusion for themselves and others is by changing the very definitions of words. An example of this would be racism. Racism used to mean, prejudice, discrimination, or antagonism directed against someone of a different race based on the belief that one’s own race is superior. However, the left believes in affirmative action and that white people, by their very presence, are bad. In turn they changed the definition of racism, so that only people in power can hold these beliefs and that minorities cannot. Another example is the definition of a man and a woman. A man used to be someone who has XY chromosomes and a woman XX. However, the left is attempting to change the definition because under the old definition, a person born XX can never be XY nor XY can never be XX.

As stated before, the right does not have a clean conscious as my detractors will point out in the comment section. Yet, the reason it does not occur at nearly every turn, as it does on the left, is because they are not basing every standard and belief on one very flawed philosophy.

The right has attempted to combat the left by pointing out the hypocrisy but, more often than not, the left comes out unscathed. They are masters at escaping the wrath of being exposed of their clear inconsistencies by using two methods. First, they change the definition of words as stated above, and second, they disguise what they truly want under nice vague wording. If the right ever wants to expose the left, then they must force them to define everything and they must force them to acknowledge what they really mean.

An example I like to use on how to fight is the topic of abortion. They’ll often say that it’s the women’s body so it’s the women’s choice. First you must undress the nice sounding phraseology by asking them, choice to do what? They’ll often respond with something like, “choice to terminate the fetus.” At this point you must ask, “do you believe that a woman has the choice to murder the unborn baby in the wound? “, which they will have to respond yes. Next you must point out the contradictions. You must ask questions like, “do you believe that a women has the right to put whatever she wants in her body, such as cigarettes, hamburgers, soda, heroine, even if pregnant? Do you believe that the women has the choice to choose how to raise her children? For example if they claimed they were transgender, can she tell them they are wrong? If not, what is the difference between the aforementioned choice and the ones that you are against? “

Forcing the left to define what they mean and exposing their contradictions is the only hope to stopping the left’s doublethink. When they say free healthcare for all, tell them to define free, and show them where it’s not free. When talk about men and women, force them to define them and then point out the contradiction of social constructs by having differences biologically.

The left only comes off as the party of empathy and kindness because they can disguise their true intentions under vague terminology and have turned doublethink into an artform. If the right does not expose the left as their true identity of big government control and tyranny right now, then everyone will know when it’s too late because we’ll be living under it.