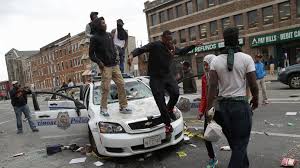 Note: Please read this whole piece before commenting. It is not a hate piece, which you will see if you read it through.

Trying to honestly talk about America’s black population and their extreme proneness to violence is a very difficult subject to talk about. Mostly because the liberal media has deemed any such criticisms as racist. Even fellow black men and women who criticize the violence in their own communities are deemed Uncle Tom’s or race traitors. But after viewing the statistics, even the staunchest liberal won’t deny that there is a problem. Despite only having 14% of the population blacks account for 52.5% of all homicides and over half of all violent crime. In 2014 blacks murdered whites 446 time while whites killed blacks 187 times. Accounting for the differences in population it makes the numbers even more staggering.

These numbers make it difficult to argue and anyone that says that there isn’t a problem is being intellectually dishonest. So, there are two questions to address here, which are “why does this problem exist?” and “what can we do to fix it?”

I believe that the obvious reason that this problem exist is because of the culture perpetrated in the black communities. The biggest factor is single motherhood, at 72% total and nearly 100% in the inner cities. Single motherhood is statistically linked to failure and everyone just accepts the fact that black fathers play no role in their communities. Even worse is discovering that most of the single mothers have very little education themselves and are dependent on the state to survive. The coveted gang and thug culture is another reason that the violence is so high amongst black citizens. The celebration of violence, sex, and not caring about anything is constantly heard in rap music and no one blinks an eye.

So, how did it get like this? How did a whole culture take such a turn for the worse? My theory is that this culture started after WW2. For years, black Americans wanted to be accepted by their fellow white citizen as American. The hope was at an all-time high after WW2. Many of them believed that, after they bravely fought in WW2 for the US, the whole white and black divide was over. However, this was not the case and even though the greatest generation did so many wonderful things, this was not one of them. In the years following WW2, we saw a huge influx of immigration and extreme American growth as the US was essentially Rome without an enemy. Europe and Asia had been decimated in the war. But with this expansion the black community had to watch from the sidelines because they didn’t get to play by the same rules as white people.

I believe the treatment of black people after WW2 was the straw the broke the camel’s back. The black population decided they no longer wanted to be a part of American culture, especially white culture. But when they threw the bad part of white culture, they also threw away the good parts of American culture. They threw away the nuclear family, the belief in capitalism, and the belief that you can make something of yourself in you work hard.

After 20 years, America realized their mistake and had the civil rights movement in the 60’s. However, the black culture had already shifted and was no longer attempting to become equals with the white man. Redemption was necessary, but a lot of white people still felt very guilty and this is where they made a huge mistake. The mistake was that a lot of people refused to criticize or show outrage towards the black community’s increase in violence, crimes, and single motherhood. Even though we felt bad as a nation, we shouldn’t have made excuses for or subsidized those new trends. We should have tried to help correct them.

In the 1960’s, children born to a single mother was around 30%, today it is 72%. The reason is because we constantly make excuses for the black community. Yes, they absolutely have a right to be angry, but making excuses for poor behavior doesn’t help anyone. Yes, the current trend of violence is the black communities fault now, not the white mans. We have not become more racist since the 60’s, yet single motherhood, crime, and high school dropouts has increased dramatically. If you beat up a kid after school every day, they will hate you and they should. If you realize your mistake and apologize and try to work to help them out that’s great, you should. However, if the person you beat up starts acting out, hitting other people, and stealing, you should not make excuses for them. Trying to protect them from trouble because you feel bad doesn’t allow them to grow and become a better person.

Now that I’ve given my opinion on why the inner city black community is the way it is, I believe there is a solution. First and most importantly, we need more police in those areas. We need stricter laws that make sure that this lifestyle is no longer tolerated. Finally, we need the liberal media to stop making up excuses and protecting these gang-bangers. They need to stop blaming police or racism and call out these poor violent communities. We also need to stop subsidizing bad behavior and paying for single mothers who have 14 kids and 10 fathers because the kids don’t have a chance of being successful.

When the black community realizes that they have no outside help, the behavior will slowly subside. Also, you can’t keep telling black people that every time they don’t succeed it isn’t their fault and the white man is always out to get them. The reason is because it’s not true and it contributes to hatred and apathy in their situation. If everyone keeps telling me, from a young age, I’ll never become successful because of some outside forces, I will have no hope and my rage towards these forces will begin to grow.

This opinion is of the black culture as a whole, not of every single black person. There are millions of black people that are absolutely essential to America (Ben Carson, Thomas Sowell) and these individuals are the people that we should be holding up as the example, not morons like Jay-Z. The heroes of the black community should be entrepreneur’s, doctor’s, economist, etc. Not gangbangers who could rhyme like a 5-year old and brags about stupid things.

America, we need the black culture here in the United States. These people have been and still are essential to American prosperity. Their ancestors were here in the beginning and everyone needs to remember that they are every bit as American as you. We shouldn’t cast off the black community, we should extend our hand and pull them up because our brother has fallen. Not excusing bad behavior and calling out violence is not an excuse to racist to hate on the black community. Don’t forget the black community went from 0% literacy to 50% literacy in 20 years after slavery, which is truly amazing. Black people have produced the likes of Booker T. Washington, Madam C.J. Walker, Annie Malone, Martin Luther King Jr., Thomas Sowell, Ben Carson and numerous others who have overcame extraordinary odds that most people couldn’t comprehend. They believed in the America and its greatness despite its flaws at the time. If we can get our fellow black citizen to embrace our American culture again, we will be on our way to making America even greater.