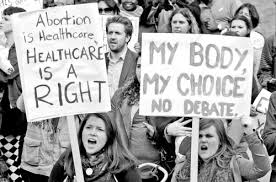 We caught up with a middle-aged feminist, Apple Feminazia, on the University of California Berkley’s campus. Apple was handing out pamphlet’s that called for the rights of American’s to help raise other people’s children. When asked what the pamphlet really meant, she stated, “America is a community and we all have a right to raise each and every single child as a community. Currently, under this corrupt system, the biological parents are the only people that get to raise the child and fill them with their thoughts and opinions, while the rest of the community can’t. I am proposing a law where the whole community has a hand in raising these children and where the children have access to more than one opinion.”

We asked Apple why she didn’t have children of her own to indoctrinate raise, she angrily retorted, “I aborted all my potential children because those little fetuses can’t control my body.”

We asked an abortion feminist theory major, who goes by the name Pond Waterfall, of Ms. Feminazi’s proposed new laws. The abortion feminist theory major stated, “I agree because it’s 2016 and we can do whatever we want with our bodies. But just because we don’t want to have children ourselves, it doesn’t mean that you can raise yours anyway you want.

We found the lone conservative on Berkeley’s campus, who asked to remain anonymous, to get his thoughts. He responded, “I’m against abortion because I believe life starts at conception. However, feminist kind of make me change my stance. Not because I agree with them but because then liberals will kill their young while conservatives can out breed them.

When we caught up with Apple Feminazia to gather her thoughts on what the students of Berkeley said but, to our astonishment, she claimed to be no longer protesting. When asked why she was no longer calling for these laws, she happily responded, “A college professor handed me an application here at Berkeley, and said that liberals are able to indoctrinate these youngsters at the Universities, so there’s no need for these laws.”

We checked up on Ms. Feminazia several weeks later and discovered that she had not only already been hired as a professor, but she had already been promoted to the head of indoctrination or as some refer to as the University President!