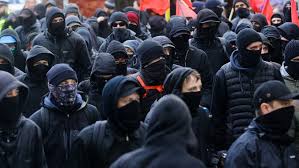 In order to stop Nazism from spreading, the young leftist SJW group, ANTIFA, has decided to capture and send all Trump supporters to a contemplation camp where they will learn not to be Nazis. At the camp, through hard work and discipline, these young conservatives would learn the value of not being fascists. We approached some masked members of the Antifa group where we had an opportunity to speak with their leader.

Not wanting to give his true name, because if his mom found out how late he was out he would be grounded, the leader of Antifa went by the pseudonym Bernie, after his hero Bernie Sanders.

“It turns out that violence, silencing, and shutting down all speech isn’t enough to stop these fascists from turning America into Nazi Germany,” Bernie said. “We decided that the only way to save America was kidnap and force these fascists to contemplation camps. There, they’ll be forced to do hard labor while being taught true socialism and how to care for others. Hopefully this will save America.”

We asked Mr. Sanders if he saw the irony in sending people to camps to prevent Nazism. Mr. Sanders laughed and responded, “It’s a contemplation camp not concentration camp!” He then took a little more defensive tone when he said, “Antifa and the left believes in big government, wealth re-distribution, anti-capitalism, universal health care, and gun control. We also believe that if you aren’t a good leftist that you shouldn’t be allowed to have your voice heard. Now you tell me what about that is like Nazism?”

We asked young Bernie what if he was doing anything else besides being the leader of Antifa. Bernie retorted, “I used to be an artist before I got into politics, but now I’m more of a writer. Currently I’m writing my own autobiography entitled, “my life.”

Mr. Sanders scurried off as he was off to another rally, where he was going to start branding conservatives with a Reagan star. This way his followers will be able to identify, who to send to the camps.