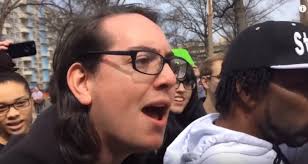 18-year-old, self- proclaimed social justice warrior, Aiden Yantz, was sentenced to four years of progressive re-education after calling a Muslim man a homophobe, bigot, and a sexist. Aiden stood before the social justice council Friday, the following day after the incidence took place.

“It was an honest mistake,” Aiden pleaded with the court. “I heard a man yelling that all homosexuals should be killed and that women were only placed on this earth to serve men. When I looked to who said those hateful comments, I saw a man who appeared very light skinned, so I assumed he was a Christian and I began to yell at him. But I swear, when he started talking about apostates and the Prophet, I immediately apologized for criticizing his culture!”

After hearing Aiden’s plea, the three social justice judges, led by Amy Schumer, Lenah Dunham, and Sally Kohn left to discuss if there were any social laws that were broken or if there needs to be any consequences for the young man’s actions. After about 10 seconds of deliberation, they returned with their answer.

Sally Kohn, the leading social justice judge, said “Mr. Yantz, what you did was absolutely disgusting. You assumed that a member of the peaceful and loving religion of Islam was an evil Christian. You should have known that he wasn’t a Christian when he took such hardline views on homosexuality and women. The exact second he said that he thought homosexuals should be killed, you should have known he was a Muslim and therefore, a member of a social justice warrior protected religion. For this I sentence you to four years of progressive re-education and $100,000 dollar fine. (This punishment actually meant that he had to receive a feminist studies degree from UCLA- Berkeley.)

After the court proceedings, we asked Aiden how he felt. Aiden responded, “I’ll never yell at anyone for being Christian again, unless I’m sure that he/she is.”

Mohammed Akbar Faqir, the man who was yelled at, was asked how he felt about the courts decision. He responded, “I was very happy with the outcome. I was so scared when the 5 ft. 3 in., glasses wearing Aiden began to yell at me. I’m glad that justice was served because I was told that, when I came to this country, that I would be able to say and do whatever I want and no one would be able to criticize me! Praise be to Allah that justice was served!”